When I first wrote out this piece yesterday I was scared to post it. It was too serious. Too angry.  As a woman, I have been conditioned to be nice and I did promise my readers some lightheartedness after a year or so of misery-lit. I realised I was scared to be truthful, when the whole point of the post was about telling the truth!  So I’m posting it.  If you decide to keep reading I promise you a laugh at the end.  I chose that joke partly because even though I first saw it 30 years ago, it still makes me chuckle. And also because it sums up how women are trained. We are gifted. But sometimes we don’t use our gifts. Time to start pulling the door open and stepping into the room. So here’s the unfunny stuff first…

I always thought I had a voice because I was loud. It’s only recently I realised that volume just got me noise, not noticed.

But as I write more and more about women’s issues, and stand up for myself in relationships where previously I was loud but unheard, I realise that voice is about standing by your convictions and speaking out when necessary. There was a TED talk last week on speaking up by negotiation expert Adam Galinsky, where he explained that our power determines our range of opportunity to speak up.  “Women have the same needs as men to speak up,” he said, “but they have barriers in doing so.”  He claimed that gender differences were power differences in disguise (as if women needed to be told this!).  The one time that women equal men when it comes to speaking up is when they advocate for others. We are better at doing it for others than ourselves. So as I reach the middle of my life with a genuine feeling of excitement, I am learning to stand up, speak out and lean in.

I recently listened to the fabulous Irish Times Woman’s podcast with the incredible Mona Eltahawy who wrote the book Headscarves and Hymens: Why the Middle East Needs a Sexual Revolution. I was in the car at the time, and tears were streaming down my face at the power of her words.  As a muslim woman who was arrested and sexually abused while in custody in Egypt, she has grabbed her own power from those who would have controlled it, and uses it to blistering effect.

So I felt a little braver when a piece I had written came out in the Irish Times recently. For those of my readers not familiar with the Irish situation, women are denied the choice here to make decisions affecting their own reproductive rights, and in a tense atmosphere, there is a campaign to revert this. I strongly felt that often the messages are being lost, and the fact that real women, with real complicated lives were not having their stories told. So I decided to tell mine.

Unexpectedly, I got an amazing response. The debate is so divisive in Ireland that I fully expected a tsunami of abuse.  But a lot of people, while offering their support, called me brave. I don’t feel brave. I felt sacred when it came out. Scared.  Writing it in the comfort of my kitchen was one thing. Realising that people who know me, but didn’t know about me, would read it, filled me with slight dread. I expected the trolls to backlash. But they didn’t.  I got overwhelming support. But as I went to bed last night I wondered about the 10 women who had flown that day to the UK because taking charge of their lives here is a criminal act. I thought perhaps they were home again now, having an early night because tomorrow they will put their faces on and keep going. I thought about the women who were lying awake in bed, having kissed their children goodnight, knowing they are flying tomorrow. And tomorrow’s kiss would be a little more intense NOT because those children have been chosen but because life is fucking complicated, and messy and we all make mistakes amid all the ball juggling we do, and the unplanned happens, and one time it is the right time and another time it is absolutely not the right time.   Choice here is not one child over another. Choice is about the power to make the best decisions for you and your family at that time.

It takes two people to have unprotected sex, yet only one to bear the physical repercussions. Why is all the responsibility put on women, and all the power taken away from them?    If there is choice, there can also be greater support such wider, better – far better – sex education, and not just on the mechanics of procreation and contraception but all those issues that impact it – consent, peer pressure, date rape, rape, alcohol abuse, sexual safety, and while we’re at it, sexual pleasure.

I have three daughters and after I explained to them that yes, a man like Trump actually did become President, I knew I had a harder hike up that mountain that I’m climbing to keep them brave, help them know their own voice and to use it, guide them to trust themselves even in the midst of gender pay gaps and sexism, and believe sometimes against the evidence, that they are valued and valuable.

But I will advocate for them, and I will also speak out for myself. My voice is no longer as loud as it once was, but it is much stronger.

OK… now I promised you a laugh… oh this still makes me smile.. 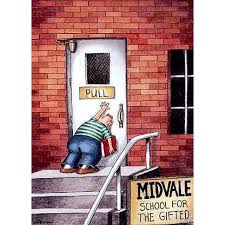 Children's fiction writer & blogger on the first Monday of every month.