The uniform of life

I’ve just laid out some new clothes on my eldest daughter’s bed.  Despite there being a threat of summer in the air, they are black; a black jacket, a black cardigan and black sandals. She is 10.

It seems 10 is the new 16, and black is the new orange, and goth is the new princess. She will wear colour (pink or purple) but no pattern, please. She will not wear dresses, skirts or jeans (yes that’s right… she won’t wear jeans). Just black leggings.   Only black leggings. I asked her what was going to happen when the weather improved and black leggings become too, well, black and leggingy.   So she pondered this for a while and then made a seasonal fashion concession “I’ll wear my denim shorts.”  (She doesn’t have to concede on T-shirts as that’s what she wears all winter as well.)

And so this is her uniform: black leggings, with whatever top is in order, with matching bows. Bows – BIG bows are the new thing… last year it was hairbands with flowers, this year it is bows and her whole class are obsessed. Last week I found myself screeching to a halt on a busy road because I saw a handmade bow stall and I stuck my arm out to the lady shouting – “give me whatever you have for a tenner!” while ignoring the honks of the cars queueing up behind me (seems her obsessions become my obsessions).

All her friends in the Black Leggings Brigade are the same.  Leggings, runners and tops, occasionally a fleece and hoody are allowed: the uniform for this current phase of childhood, and this union of like minds.  I remember, way back when, at the age of 3, she started defiantly stamping her fashion foot (Lelly Kelly clad of course). I dressed her in practical non-gendered clothes like blue and red trousers.  And then one day, she woke up with more than her milk teeth, and demanded that from that day forth, only pink would suffice, and she fluttered into her new role as a pink and pretty princess. It was all nature, no nurture.  But that phase changed with her height and her attitude and pink faded into purple, and a rainbow of other expressions of her ever changing self followed.  And in so many ways, the clothes we choose to wear, the uniform we create for ourselves is just that: a representation of our current phase of life.

I look back on my own phases, so many of them cringe worthy, and so many of them attempts to fit in to my surroundings, or my peers, or my aspirational ambitions (If I dress like a serious professional woman, I might eventually feel like one instead of a fraud). Often in my life, I would turn up in the wrong uniform.

Unlike my girls, who have a say in what they wear – and have no issue expressing that say! – I had none until I was well into my teens. I spent my first years as a blossoming girl, feeling like a wayward weed sprouting chaotically in the wrong place. I wore plastic national health glasses, invariably cellotaped together on one side as my dad would only pay to get them fixed when I had broken both legs.  I wore ghastly styles that were even ghastly by 1980’s standards, and home made clothe 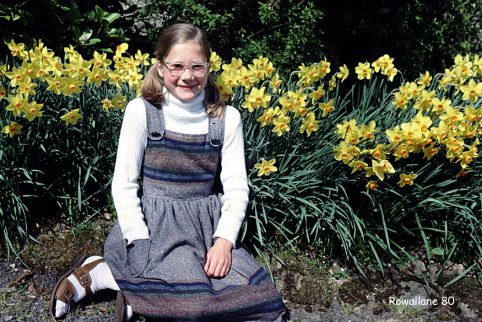 s. In fact, my mum’s friend, being a better dressmaker than my mum, made clothes for her two daughters and then they were passed to me so most of the time I actually wore second-hand home-made clothes.  When I did start expressing myself, I was such a booky nerd, I had no idea about fashion (despite being an avid Jackie reader.)  I remember one day, about mid-1980’s, when drindle skirts had made a come back and I was going out with two friends. I had finally persuaded my mum to get me an (actual shop-bought!) drindle skirt but I didn’t have the know-how or budget to wear it properly with white ankle socks and tucked in blouse. So it looked like something my big sister would have worn (had I had a big sister, and a big sister who also had no fashion sense and perhaps was a missionary out in Africa).  As we three prepared to go out, my other two friends complimented each other and it went back and forth along the lines of:

“You look amazing. You are so much prettier than me,”

“Stop!  You are so much prettier than me. Your skirt is fab.”

“No, you look much better. Your skirt is gorgeous.”

And on it went until I must have coughed and they both glanced round from their mutual admiration frenzy and just one look at me ended the conversation. No-one even attempted to pretend my look made it into the conversation.  Then, when I was around 15, that excruciating phase of trying to stand out while trying to fit in, I went through a purple chapter.  Everything was purple. Even my eyes. Tongue-poking-out-my-mouth labours of applying 16 shades of purple eyeshadow just made me look like I’d been punched in both eyes, but still I persisted. And then there was the androgenous phase. Buttoned up shirts and bow-ties. I kid you not.

So from such auspicious beginnings, I suppose the only way to go was up, although I could document a few more really special moments in my fashion fiasco history, but honestly, it is only in the last few years that I have finally found myself in the mirror.

“Ah!” I say to my reflection, “you look on the outside, how I feel I am on the inside.”  At 46, I finally see who I am.  I have hit middle age, but I really feel I am only – finally – getting started. Middle age used to be the beginning of the end, but now, as I venture out of a highly damaging marriage, with a career of creativity blossoming around me, with the baby years behind me and three amazing girls to adventure with, and an army of friends who have battled to get me through, I feel I am just at the end of the beginning.  A whole new life is at my feet, and for once, I know what shoes to wear.

150 years ago, women’s life expectancy was 40.  Now it is 83.  That is an entire extra lifetime.  I intend to live it well.  And the uniform I chose to dress myself in armour?  As I preen, and pluck and dye and exfoliate and shed the wear of worry, I swing my scars like bling, flashing and defiant. I wear my character, built from adventure, pain, and love. I wrap myself in a luxurious cape of friendship. I accessorise with a defiant, reliant smile, and I clothe myself in hard-fought self-love.  Oh, yes, and a wardrobe of clothes I finally love.

1 Response to The uniform of life