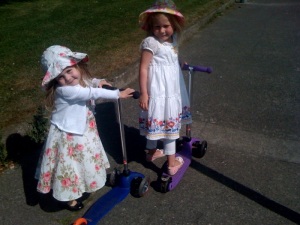 Growing up happens in stages. Little steps lead to giant discoveries, incremental instalments ignite monumental growth. Take the walk to school. Last year when Daisy started playschool, this involved two toddlers and one double buggy ride a mile and a half down the road. As the year progressed, Daisy walked to the lights before getting in the pram, while Poppy reigned supreme in her heightened position in the buggy like Lady Muck, her sloth a convenient decoy for my annoyance at her slowness. By the summer term though, I had Poppy (kicking and screaming most of the way it has to be said) walking to the lights, and Daisy to the main junction, about a mile. And I pushed them the last half mile, baby rocking in my tummy, already in the swing of the school routine before she was even born.
The new school year started last September and fresh and frisky targets were set. Poppy now walked to the main junction, Daisy three quarters of the way, my new baby swinging in the carrycot under the pram, born but still being rocked to sleep by routine. Poppy still talked the talk and got to play Lady Muck, but only if she walked the walk first.
After Christmas, the new goals stretched before them – Daisy the whole mile and a half, and Poppy to one street past the main junction. I invented games to keep them from noticing, we watched the seasons play out in the cherry trees and gardens we passed, saying hello to the trees like old friends we’ve come to know so well.
And now, Easter holidays over, the summer term begins, and it all changes again. Daisy and Poppy now scoot the whole way, while I (jog) to keep up, Ruby no longer asleep for the commute, but reigning supreme as Lady Muck, awake and alert, eager to get out and creep those first crawling moves. In no time at all I suspect, she’ll be scooting too, and the trees will wave their branches hello in the wind as she takes her place on the walk of life.

Bouncing into middle age armed with courage, ambition and a pair of tweezers (chin hairs for anyone over the age of 45 reading this) I am a writer with a mission: to redefine this midway point in my life when the last thing I want to do is hang up my high heels and become invisible. This is the end of the beginning, not the beginning of the end. A single mum to 3 fabulous girls, an author, and a fundraising consultant, both ends of my candle are on fire. As I enter this new stage of my life, I want to explore what it means for 'mid-aged' women today, who were promised they could have it all, ended up doing it all, and just do not identify with the traditional image of middle age.
View all posts by Grin & Tonic by Alana Kirk →
This entry was posted in growing up, scooters. Bookmark the permalink.

Earthwalking
Wheelie me - Still me!

My Midlife Mayhem By Louisa Simmonds